For reasons that I cannot logically remotely fathom, except that perhaps we humans are highly susceptible to creating sanitized and palatable versions of our recollections of “the good old days,” which in fact were never as good as we remember them to be and may have been downright horrible, United States President Ronald Reagan is continually held up as a hero and a paragon of virtue, wisdom, and good governing.

The reality then and now could not be further from the truth in any of these categories.

Even before Ronald Reagan was president, his mental status was a source of concern. He often made contradictory statements, had frequent difficulty remembering names and people, and regularly seemed to be prone to absent-mindedness.

I was very young when President Reagan came into office, but I have clear recollections of how bad the economy was during his tenure (President Reagan was the “trickle down economics” president, promoting the pie-in-the-sky idea that if the United States gave financial preferences to the very wealthy, then they would in turn create jobs and juice up the economy down through the poorest people in the nation) and how much wrong-doing occurred during his presidency.

Don Henley’s “End of the Innocence,” depicting pervasive corruption, dishonesty, greed, and despicable behavior that touches every part of life and written during President Reagan’s presidency has become, in my mind, the most honest and enduring description of the United States, from its politicians to its businesses to its people, has a couple of verses that deeply resonate with me every time I think of President Reagan’s years in office:

“O’ beautiful, for spacious skies
But now those skies are threatening
They’re beating plowshares into swords
For this tired old man that we elected king

Henley’s song refers to the Iran-Contra affair, which, in more detail than ever before, exposed the truly despicable and seedy underbelly of how the American government, military, and intelligence services have always manipulated, by whatever means were deemed necessary (the end justifies the means), world geopolitics to attempt to give the United States the upper hand in outcomes.

It is very likely that the real principles – Colonel Oliver North threw himself on his symbolic sword as the fall guy when it came to light – in this scandal took advantage of  President Reagan’s already-apparent cognitive impairment.

Evidence that President Reagan was already into his progressive slide into dementia includes his often-confused testimony during the Iran-Contra hearings and the unprecedented number of times, with obvious confusion on his face, he said “I don’t recall.” 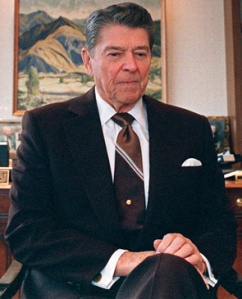 While this statement is a standard in legal defenses, what made President Reagan’s more than a legal maneuver was that it was clear that he really didn’t recall much at all.

This year, a study was done by researchers at the University of Arizona on President Reagan’s speech patterns during his eight years (1981 – 1989) as president of the United States.

What the researchers found were subtle changes during those eight years that revealed the tell-tale signs of the change-in- communication step of the journey through dementias and Alzheimer’s Disease.

These included searching for words, substituting generic terms like “thing” for specifics President Reagan could not remember, and a decreasing range of vocabulary as his time in office progressed.

Although President Reagan’s dementia was not publicly announced until 1994 – a move I believe was calculated to give enough time after his presidency to remove suspicion that President Reagan had dementia while in office – it has since become clear that his dementia gave the people around him the leeway to set in motion the kind of governing (and it does nobody except people and institutions with a lot of money and a lot of blackmail-type secrets any favors, while getting sleazier and sleazier by the minute) we live with and take for granted as “normal” today.