Daddy and Mama were married at Unaka Baptist Church in Johnson City, TN on June 9, 1956 by Howard T. Rich. It was a small wedding, with close family and like-family attending.

Harry Aiken, my mama’s cousin closest to her in age, gave her away in marriage to my daddy. Lois Aiken, Harry’s wife, made the wedding cake.

Aunt Velva, who wrote the wedding invitation, was my Mama’s mother’s sister.

Although this side of my Mama’s family was gifted and intelligent beyond words, the actions of Mama’s grandmother, Amanda Metcalf – read the book! – (the mother of Velva Runion and Mama’s mother, Ennis Metcalf Foster, wife of Samuel Anderson Foster) made Aunt Velva believe that she could not be at my mama’s wedding. 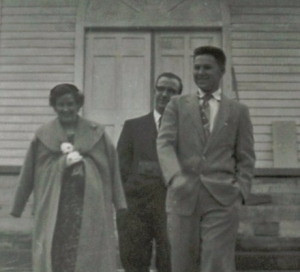 Such a sad story on my parent’s wedding day, and much of what happened with my mom’s side of her family ended up being sad as well. Other than Harry  Aiken, who gave Mama away, not much of Mama’s family on either side of her parents attended her wedding.

From what I can gather – one of those conversations in the afterthought that I wish I’d asked both Daddy and Mama about – the only people there for Daddy were both his best friends from high school – Jennings and Lydia Berry. None of his family attended the wedding.

The slight was because they believed Daddy had married beneath himself when he married Mama.

Daddy’s extended family, which he grew up around (but thankfully for all of us never copied in spirit, in temperament, and in life), abandoned him in the happiest time of his life.

Despite all of this, Daddy and Mama soldiered on. Daddy finished veterinary school (Daddy was a licensed physical therapist teaching at Duke University when he and Mama met – he wanted to be a doctor and she wanted to be a nurse, but when those aspirations dissolved, they both found other ways to do what they were born to do) with Mama’s help.

Daddy worked briefly as a veterinarian for the federal government after he graduated from Oklahoma State University. After being ominously followed for over 100 miles by shotgun-toting cattlemen from the western Louisiana border deep into the northeastern part of Texas toward his young family, Daddy decided he needed to go home to North Carolina.

Daddy took a job with the North Carolina Department of Agriculture as a veterinarian who specialized in large animal disease control.

His job took us, and Mama, literally from one end of North Carolina to the other. It was a life on the move and one that, unlike my siblings, I really didn’t mind and which I’ve tended to continue in my adult life.

How Daddy felt about it, I don’t really know. But Mama always wanted to get back home to Tennessee.

Almost trip to Tennessee included Mama’s inevitable tears as we started back home from Telford to Johnson City, then through Elizabethton to US 321 and the curvy mountain road that would eventually turn into US 421 in Boone, NC.

By the time we were back in North Carolina, Mama’s external crying had ended. But my guess is that her internal crying never really stopped until Daddy retired and finally took Mama back home to her beloved mountains.

My parents were blessed to have almost 43 years together as husband and wife, as soulmates, as best friends.

I will never forget Mama coming home after his burial, sitting in the chair in their bedroom, and taking off her wedding rings saying solemnly, “I’m not married anymore.”

I’d held it together fairly well until then, but that was the straw that broke the camel’s back for my heartbreak for her and for the loss of Daddy to be complete.

Both Daddy and Mama rest now in their graves, awaiting the return of their Savior and that resurrection to incorruption they believed in, hoped for, and are now assured of sometime in the future.

When I die, I will be buried in the same cemetery toward the back but in their direct line of vision – and mine – when we are granted the gift of salvation.

May that day come soon. Until then, rest well, Daddy and Mama. I love you both dearly.