It’s hard to believe, Mama, that it’s been six years since your last birthday in this life. I can’t begin to express how much I miss you, but I’m glad you’re not suffering anymore and you await that resurrection to incorruption in every way. I’m also glad you’ve been spared the trouble, which would have disappointed and dismayed you, of the last six years on every side. That is perhaps the greatest blessing of your death, at least in my mind.

You were just a few months away from your death, and I had already sensed that, as you were sleeping more and more and your health and memory in general was declining right in front of my eyes.

Your birthday was always special for you and me, but that last birthday, you didn’t even know it was your birthday, so I knew it was going to be different for us. I just didn’t know how different.

About midday, after sleeping most of the morning after breakfast, you told me you didn’t feel good and you were nauseated. I remember getting a basin for you just before you got sick to your stomach.

I meticulously checked you and you had the cold, clammy sweat of a heart attack, but when I asked you where you hurt, you pointed to just below your rib cage on the right side.

I asked if we needed to go to the hospital, and you said, “No, I just want to lie down on the couch and sleep.” I agreed, but I also said that if you were still in pain and throwing up later in the day, we probably needed to go and get it checked out. You agreed.

I got you to the couch and got you comfortable and watched you sleep for the next several hours. When you awoke around 5:30 that afternoon, the cold, clammy sweat was back and you threw up again. You told me the pain – in the same place – was bad. We decided to get you to the hospital.

It wasn’t a particularly chilly day in northeast Tennessee that day, but I bundled you up anyway (because hospitals are notoriously cold), and I got you in the car to take you to the nearest hospital to us.

You were crying because the pain was so bad and I was comforting you, while trying to get us to the hospital safely and quickly. It never occurred to me that you would get sick again in the car, and you got upset, but I assured you it was fine and I’d clean it and you up when we got there.

I parked in front of the emergency room door, got you all cleaned up, and took you in to be taken back so I could park the car. The nurse took you back to a room right away.

When I came in, I told the nurse what had happened that day, and I told them you were in a lot of pain and I told them where. At some point they did an ultrasound, but it was several hours before the doctor got back to us with the results.

Around 11 pm that night, the doctor came in and said your gall bladder was infected. He said they couldn’t treat you there, so they were going to take you by ambulance over to Johnson City Medical Center Hospital (JCMCH).

I asked how long it would be before they would transport you and the nurse said probably an hour. I let you know I’d go home and quickly pack bags for both of us and I’d be back before the ambulance took you over to JCMCH.

I was back awhile before the ambulance actually loaded you up and I followed behind you to the hospital.

By the time we got there and we got you settled into bed and comfortable, it was almost 3 am. You slept, though, while I tried to sleep in the chair beside your bed.

At 7:15 the next morning, a gastroenterologist came in and announced he was going to remove your gallbladder. I remember disliking him – and his I’m-god-and-you’re-not attitude – as soon as he walked in the room, and his pronouncement really deepened that dislike.

Quite frankly, with God’s help, I was able to control my temper – and my innate desire to rip him to shreds – and very calmly and politely tell him that you would not survive gallbladder removal because your heart wouldn’t be able to take it, so he had to give us another option.

The gastroenterologist’s face turned red and his eyes betrayed his anger at being told, “No.” With contempt dripping from his voice, he almost shouted at me, “Well, we can put a drain in to remove the infection, but she’ll be back in here in a year from now with the same condition.”

And I thought, “My mama’s not going be here a year from now,” because I sensed, more than I actually knew, that your time on this earth was rapidly coming to a close.

You and discussed the drain and agreed to do that, and I told him that was the option we wanted. He huffed out of the room, obviously not happy with either of us.

The nurse brought your breakfast in a little later and told us the procedure was scheduled for Sunday before noon. I went and got coffee and you and I tried to rest, as much as a sick person and a well person can do that in a hospital, the remainder of the day.

Early the next morning, a nurse came in with the paperwork for me to sign. The gastroenterologist had ordered surgery to remove the gallbladder.

Again, with God’s help, fighting back my temper and my anger, I took a deep breath and told the nurse I wasn’t signing the paperwork because that was not what we had agreed to and that it must be modified to reflect the procedure to put in the drain.

She said, “You have to sign this.” And I said, “No, I don’t and I won’t.” She got flustered and scampered out of the room.

Dr. Gastroenterologist stomped in about 10 minutes later and I calmly reminded him of what we had agreed to allow him to do.

He stomped out of the room and an hour later, a different nurse came in with the corrected paperwork, which I signed.

The drain, which was in for six weeks, was successful in removing the infection, but not only was that the last time you and I ever went to the hospital, but from that point on, you physically and neurologically went downhill rapidly.

But I remember a couple of months after the procedure something that still makes me smile.

I was very careful with your diet because of the gallbladder and made sure to stay to stay away from all the foods and types of food that could trigger more issues.

But late one afternoon in May, I asked what you wanted for dinner, and you said, “that place with the good burgers.” It took me a bit of detective work, but I finally realized you were talking about Five Guys. 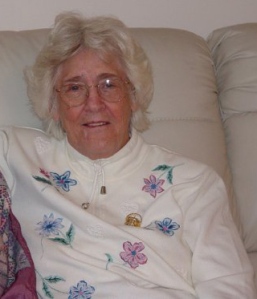 Those – and, of course, the ones before dementias changed everything for both of us – kinds of memories of our lives together sustain me.

It doesn’t mean, though, that I don’t miss you (and Daddy) terribly and can’t wait until I see you both again.