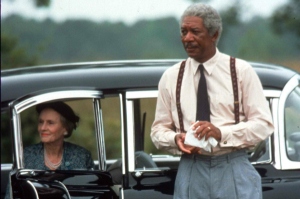 Driving Miss Daisy, the 1990 Academy Award-winning movie, is one of those rare movies that is both expansive and intimate as we take a journey through 25 years of the elderly life of Miss Daisy.

Miss Daisy, portrayed by one of the finest actresses I’ve ever seen, Jessica Tandy, is both a student and an educator (she’s a former schoolteacher) in this multilayered drama that takes her and us through the sweeping political and social changes in the three decades following the end of World War II.

The unlikely, and initially unwanted, relationship and friendship that develops between the 72-year-old lively and independent Miss Daisy and the calm and steady Hoke Colburn, portrayed by Morgan Freeman, who is hired by Miss Daisy’s son, Boolie, portrayed by Dan Akroyd, as Miss Daisy’s driver after she wrecks her car for a second time in a short time span is both poignant and endearing.

Although they come from completely different worlds in every sense of the word, they learn a lot from each other and they grow because of each other.

When Hoke comes in one morning after 23 years with Miss Daisy and finds her frantically running around the house because she believes she’s late for school to teach her students, he calls Boolie, who immediately puts Miss Daisy in a nursing home.

Hoke, who now depends on others to drive him around, isn’t able to visit Miss Daisy often, but he goes to see her in the nursing home when he gets the chance.

Boolie has a mostly hands-off relationship with his mother: he loves her and takes care of the practical things she needs, but she’s mainly a nuisance who often gets in the way of the rest of his life.  Watching their interaction – and the lack of time Boolie has for Miss Daisy – is reminiscent of what many of us see in our own family dynamics with caregiving in general.

Hoke, on the other hand, is nurturing and compassionate and provides the time and the companionship that is missing from Boolie’s relationship with his mother.

We see the difference in these relationships with Miss Daisy, as well as the rapid decline of dementia, near the end of the movie when Boolie and Hoke go to see her in the nursing home on Thanksgiving Day.

Miss Daisy looks and acts like a shell of her former self. She is unable to communicate and doesn’t seem to recognize either Boolie or Hoke.

Boolie makes quick contact and disappears, while Hoke goes in to the dining room to sit with Miss Daisy while she mostly doesn’t eat Thanksgiving dinner.

Hoke talks with her, both about the past and about his present life. He notices that a piece of pumpkin pie sits in front of Miss Daisy uneaten. 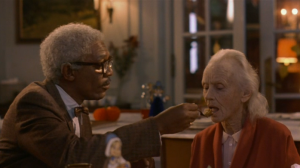 Sensing that Miss Daisy may not remember how to eat the pie, Hoke cuts it into pieces and feeds it to her. We see just the briefest of sparkles return to Miss Daisy’s eyes as she savors each bite and the brief glimpses of recognition Miss Daisy has for her old friend Hoke even through the mostly impenetrable walls of dementia that have enveloped her mind.

I highly recommend Driving Miss Daisy. It is a tear-jerker at unexpected places throughout the movie, so grab the tissues because you’re going to need them, but it’s well worth it.