There seems to be a lot of current effort going into researching into what happens neurologically while we sleep. 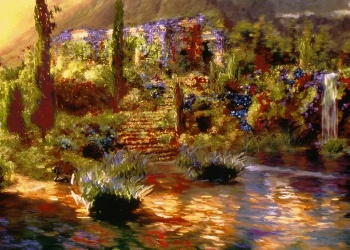 However, this article from Huffington Post that lists nine facts about dreams caught my interest, especially in light of my experience with my mom’s Lewy Body dementia and R.E.M. sleep behavior disorder.

I think this research could give some good insights into this particular facet of Lewy Body dementia, which always fascinated me and intrigued me to watch and listen to when Mama was experiencing it.

The last movie Natalie Wood made before her death in 1981 was a forgettable movie, despite a high-profile cast that included Christopher Walken (who has the creepy eyes of a villain, no matter what character he’s playing) and Louise Fletcher, called Brainstorm.

The movie is about a bunch of scientists who are trying to develop a device that will record everything happening in someone’s brain so that someone else can fully experience the same thing right down to the emotions and physical sensations (much like the virtual reality simulators we have today).

Louise Fletcher’s character is wearing the device when she experiences a fatal heart attack and all her brain activity is recorded.

After her death, Christopher Walken’s character uses the device to walk through Fletcher’s last minutes on earth, but almost dies in the process because he experiences the sensation of a fatal heart attack just like she did. The scientists decide the device is too dangerous and the project is scrapped.

While the movie was awful, the subject was fascinating because neurology is still so incomprehensible for the most part and unlocking all its secrets are, in my opinion, truly beyond the grasp of humans.

So any time we’re able to get just a sliver of a glimpse into how the brain works, it’s another piece of the puzzle, which we’ll never finish, that we can put into place.

There are some facts from the Huffington Post article about dreams that I found interesting, and may be a slightly-ajar door into understanding R.E.M. behavior disorder.

Our bodies react to dreams the same way they would if we were awake and experiencing those things and we dream in real time.

R.E.M. behavior disorder shows us that because we hear it and see it external in speech and motion and there’s a general sense of what’s going on the dream just by what our loved ones are saying and doing.

And as someone who dreams vividly most of the time, I can also attest that this is true.

If I’m falling in my dreams/nightmares (a little more on nightmares later), I literally feel the sensation of falling, which is what jolts me awake. All the fear in the dreams/nightmares is evidenced by my greatly-accelerated heart rate, profuse perspiration, and a long exhalation of breath that I began to hold just before I woke up.

The same thing happens when I’m running (these are my two default nightmares) away from something that’s either dangerous or chasing me. I jolt awake. My legs are tired, I am struggling to catch my breath, and I turn on a light to make sure nothing and nobody is there that I need to run from. All that happens in perhaps a second.

But the next fact about dreams that is fascinating comes into play here. I can’t go back to sleep because I am literally replaying the dreams/nightmares – I do this with other dreams, especially the ones that have meshed people and places and things that don’t belong together in them – too when I wake up and I can see them and go through them awake to try make sense of them or figure out why I dreamed them – almost frame-by-frame.

And there is a cadre of dreams and nightmares I’ve had over my lifetime that I recall just as vividly and in detail right now – I see them in my mind’s eye, if you will – as when I first had them, some of which go all the way back into early childhood.

Research has found that people who can recall their dreams regularly have a higher level of spontaneous activity, both in sleep and in wakefulness, in the medial prefrontal cortex and the temporoparietal junction of the brain than those who seldom remember their dreams.

The temporoparietal junction of the brain is a key player in processing both information from within the body as well as external information, while the medial prefrontal cortex is responsible, in part, for cognition (strategy, decision, actions) in environments where uncertainty (awake or asleep) exists.

Alzheimer’s Disease research shows a greatly-reduced metabolism rate in the temporoparietal junction in general and it appears that all types of dementia affect the medial prefrontal cortex.

It would, therefore, probably not be surprising to see a higher incidence of dementias and Alzheimer’s Disease eventually occur within people who have been diagnosed with PTSD. 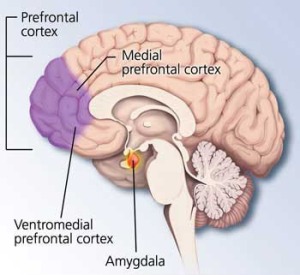 My thinking, though, of the higher activity in the temporoparietal junction and medial prefrontal cortex in those of us who usually can recall our dreams, is that it’s actually hypersensitivity of both of these parts of the brain, because research also shows a high sensitivity to sounds when “high recallers” are awake.

I am definitely much more sensitive to sounds, both in frequency, pitch, and patterns, than most people, to the point that they really bother me or I can’t be around them very long because they literally hurt (I can’t exactly explain that in tangible terms, but I experience an almost-unbearable intense sensation of both auditory and neurological pain).

Sudden sounds, whether they’re loud or not, make me jump. Extended exposure to high-volume sounds makes me physically uncomfortable. And a lot of sounds occurring simultaneously overwhelms me.

The impact of this particular research for our loved ones suffering from Lewy Body dementia and R.E.M. behavior disorder, because they do not remember their dreams at all, could lead to a closer look at the medial prefrontal cortex and temporoparietal junction regions of the brain and the role that Lewy Body proteins play in how they function.

A third fact in the Huffington Post article that I found intriguing is that nightmares aren’t always about fear, but other underlying emotions like failure, worry, sadness, or guilt. My guess is that we morph all those other emotions into whatever foundational emotion underlies all of them.

I believe that underlying emotion is the primary emotion we’re most familiar with, understand the best, and either know how to escape (in my case, running) or know it is what will finally do us in (in my case, falling off something high enough that it will kill me, usually the road or bridge that turns into a high-wire I realize I’m on over the middle of the stormy waves of an ocean with no way to get to either end safely and I look down, lose my balance, and start falling).

The last fact I’ll discuss about dreams surprised me because I’ve never heard anyone say this out loud, although I’ve experienced it. You can die in your dreams and live to tell about it.

I never died in my dreams, always waking up before inevitable death, until I was in my late 20’s.

I clearly remember my first dying dream and the sensation of knowing I was dying and then actually, in what seemed like slow motion, going through the process of dying.

How I died was not the way I would ever die in real life, but what I remember most was that once I realized I was dying, it wasn’t scary. In fact, it was, although what killed me was extremely violent, peaceful and easy, with the last sensation I had being one of relief.

I’ve died on a regular basis in my dreams since then, but the most striking similarities among these dying dreams are that they aren’t scary and there is a profound sense of relief before it all just fades to black.

I suspect because death has been on the doorstep of my life – not me personally, but with my dad first and then my mom – since my late 20’s, the dying dreams are my way of coping with that.

I also suspect that because they haven’t been traumatic experiences for me, they equipped me to better handle the dying processes of both my parents.

And they’ll continue to equip me to handle well the inevitable conclusion to my own life whenever and however it comes.

After all, dreams are just another part of the incredible, albeit mostly out of the reach of humans, complex neurological system of reasoning, thinking, understanding, and responding that our Creator endowed us with.

7 thoughts on ““To Sleep; Perchance to Dream:” Dream Research That Could Provide Insights Into R.E.M. Sleep Behavior Disorder and Lewy Body Dementia”