Coach Dean Smith had dementia the last several years of his life and as he made the inevitable slide into deep cognitive impairment, there were very few of his players and coaches that he remembered during the last couple of years.

One occasional exception was Bill Guthridge, his long-time assistant coach who became head coach after Coach Smith’s retirement. Bill Guthridge, it has recently been revealed, is going through the journey of vascular dementia.

This was my tribute to Coach Smith on my leadership blog and it deserves a place here because he has gone gentle into that good night. 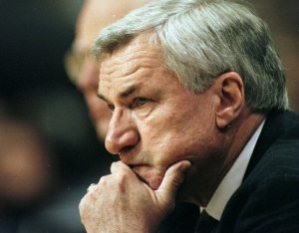 Coach Dean Smith, who led the University of North Carolina basketball program for 36 years, died on February 7, 2015 after a long battle with dementia. Throughout his coaching career and his life after coaching, Coach Smith embodied many of the characteristics of quintessential leadership.

But when Coach Smith’s life as a whole, both on the basketball court and off, is considered (and that’s the only way to consider anyone’s life, including our own, because no one – including each of us – gets it right every single time), it’s clear that his goal was to be a quintessential leader. And the results of his commitment to that goal are evident to this day.